Ruby is one of the most popular programming languages around, and folks who know how to work with it and put it to good use command top salaries. These developers also get to work on challenging and fascinating projects. There’s never been a better time to be a Ruby developer who’s looking for a new and more lucrative position. And the more Ruby interview questions and answers you know before your next meeting with a hiring manager, the better chances you have at snagging a great gig. If you study and learn as many Ruby questions for interviews as you can, you can impress your future bosses with confidence and poise.

We’ve got all you Ruby job seekers covered. In this guide, you’ll get some of the most common questions you can expect to encounter in your next job interview. We’ll give you general knowledge questions and some that require expertise, so you can prepare for anything you encounter. Preparation is the most important ingredient for a winning job search, and we’re here to help get that prep work underway.

What Exactly Is Ruby?

Hiring managers are often quite busy, so they have a limited amount of time to interview and hire a suitable Ruby developer. As a result, they need to use that time as efficiently as possible. To help prevent wasting time on an unqualified prospect, they’ll usually kick off interviews by asking a few basic questions that any developer should be able to answer. Expect to answer questions about what a Ruby program is and how it works, for example.

» MORE:  The Top Azure Interview Questions You’ll Get in 2020

You should commit this explanation to memory so you can rattle it off with a smile when asked about it. Put simply, Ruby is an open-source and general-purpose language with reflective and dynamic qualities. It contains features associated with Smalltalk, Ada, Perl, Lisp, and Eiffel. Ruby works hand-in-hand with Ruby on Rails, making Ruby ideal for modern web apps and other internet-facing programs. It’s a versatile and powerful language.

What Operators Does Ruby Use?

After you make it past the initial question and qualify for the tougher ones, you’re sure to get a few queries that dig deep into details. These are valuable questions for the hiring manager—a few questions that dig into the nitty-gritty of the code allows them to pinpoint the individuals who have the skills they need on their team. Expect questions asking you to compare Ruby to Python or other languages, and other questions such as which operators you’ll use when working in Ruby.

How Do You Create an Object in Ruby?

Ruby is an object-oriented programming language, which means that it works by creating objects and classes and linking them to build a program through loops and other directions. As such, you’re likely to get a few questions that deal directly with objects and their creation. Before you walk into the interview, you owe it to yourself to spend some time studying object creation. You might do it every day in your work, but you need to be able to explain it to the hiring manager clearly.

» MORE:  What Is Ruby Programming Used For?

Objects are both logical and physical entities. All objects in Ruby inherit their default properties from BasicObject, which is Ruby’s parent class for every class. This allows you to create alternate hierarchies for objects. To create an object, call a new class method, which is predefined in your Ruby library. The syntax is:

You’ll use this basic syntax to create any object you wish.

Along with questions that look into fundamentals such as objects, you can plan on seeing some others that deal with advanced operations. Concatenating strings is a topic you’ll likely encounter in your next interview as well. Hiring managers also love to ask candidates how many ways there are to concatenate strings in Ruby.

What is a concatenated string? Concatenating, (essentially ‘joining’), a string is to create one out of multiple strings. There are several ways to do this. Using a plus sign or a single space between strings will concatenate them. Separating strings with ‘<<’ will also concatenate strings, and you can always use the method concat to connect them.

So that’s the deal, Ruby enthusiasts. Developers with Ruby experience can land jobs with amazing pay and fantastic benefits. But to get the job, you’ve got to be ready for a rigorous interview with knowledge questions of all sorts. Knowing which Ruby job interview questions you’re likely to see gives you a big advantage, and our guide is here to help you. Preparing with our list of popular Ruby interview questions can help you get ahead of the competition and snare the job of your dreams.

» MORE:  How to Answer the Question "What Motivates You?" 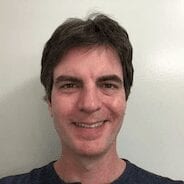 Paul Larkin
Staff Writer at Career Karma
Paul Larkin has years of experience in the tech industry and writes about cybersecurity and future of work. read more
Share This
Jan 28, 2020
Comments (0)